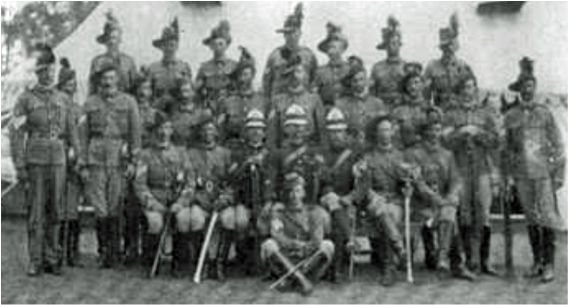 Molong introduced a volunteer Mounted Infantry Corps in May 1895, which transferred to the Mounted Rifles in July 1896. Each member of the Corps had to provide a serviceable horse with saddle complete, while the government provided bridles, head ropes, breast-plates, spurs, uniforms, leggings etc. A total of forty-three men formed the Molong Half Company of Mounted Rifles, the first mounted rifle corps established in the western district.
When Australia was asked to provide soldiers for the Second Boer War in December 1899, the First NSW Mounted Rifles were one of the first contingent of soldiers to volunteer, including many men of the Molong Half Company. Cumnock  also had some members of the Molong Half Company who volunteered and served with the First NSW Mounted Rifles – these were James Denny, Frank Owens, Christian Miller, Walter Finch and James McRae.

A number of other Cumnock men also served in various companies during the Second Boer War, 1899-1902. The soldiers who served with the First NSW Mounted Rifles are displayed on the Molong Boer War Honour Roll. The Cumnock Progress Association commissioned the construction of a brass plaque  honouring the 12 soldiers from Cumnock and district who served in the Second  Boer War. It was unveiled at the 2017 Cumnock Anzac Day commemorations by relatives of Christian Miller and Charles Grimson.
(Photo of the plaque below and in the Gallery section)

The following soldiers have been identified as Boer War veterans from Cumnock and district.
Profiles that are available are listed in blue font. Click on the name to bring up individual profiles.